Dress for the Season, Not for the Weather

It’s the middle of November, but as far as the weather is concerned, it just feels like a milder version of summer. Highs near 80 degrees each day and lows are still in the 70’s. And yet, the stores (and there are approximately one million of them) are full of puffy coats and wool sweaters. I admit, I am partly just skeptical that it is EVER cold enough here to warrant a fur bomber jacket. A quick Google search has revealed that the average temperatures for January and February are a high of 64 F (18-19 C) and a low of 57 F (14 C). So I’m gonna go ahead and say no.

Not only that, but people are already beginning to dress as though winter is imminent. I mean, I haven’t seen any puffy coats quite yet, but I am definitely seeing people in sweaters and tights and jackets. I wore shorts, a t-shirt and flip flops this weekend, but all around me I see people breaking out their outerwear.

Maybe it’s that idea that if you dress for a certain type of weather you can make it come. Maybe in a mild climate, this really does feel like fall to people. I love fall clothes and I wish I could get on board with wearing them…but I just sweat too much.

When I lived in Korea, I was amused to learn that there was a widely held belief that eating too many cold foods could cause illness. Similarly, if you were sick people would tell you not eat any cold foods. This was not just a traditional belief in the vein of an old wive’s tale. I actually had doctors tell me not to have any cold foods when I was sick.

It was not surprising to me to learn that this belief is also prevalent in Hong Kong and other parts of Asia, but what has really intrigued me was learning recently that there is a whole concept of “hot foods” and “cold foods” that is not necessarily related to the actual temperature of the food. The best equivalent for this seems to be something like languages with gendered nouns – a word’s gender has nothing to do with whether it’s a masculine item or a feminine item. Hence why the Spanish word for dress (vestido) is a masculine word. In other words, people culturally have an understanding of certain foods as “hot” and others as “cold” that is inherently learned and understood.

Similarly, people are categorized along a spectrum of hot and cold (with some variations like “dry” or “damp”, etc). One of my coworkers explained to me that a doctor can tell you which of these you are, and depending on the results, you will know what foods are best for you to eat or avoid due to your personal “temperature.” Since traditional Chinese medicine is all about balance, if you are a “hot” person, you should eat more cooling foods to help balance you out. The opposite is true if you are a “cold” person. It’s probably most similar to the old idea of the four humors.

I found this helpful infographic online that breaks it down a bit:

There Is No Limit to What Can Be Dried

You can dry anything, if you just believe in yourself hard enough. There are whole shops here that seem to be stocked with nothing but dried foods. I do not know what to make of some of these things which seem to range from fruits to odd roots to cuttlefish and squid to I-do-not-want-to-know-what. The rule of thumb seems to be, “Anything that can be dried will be dried!” Dear family members, I hope you are all super excited for your authentic Hong Kong Christmas presents this year!

Lions and Dragons and Gin, Oh My!

Yesterday I was trying to work and was hearing a huge commotion from somewhere outside with loud drums and a man’s voice booming over a loudspeaker. I assumed there was some sort of protest or demonstration going on. After about 20 minutes of this, I asked one of my coworkers what it was. She replied very nonchalantly, “Oh, it’s a grand opening.”

“Well, they have to have some lions and a dragon dance and drummers,” she said as if this were obvious.

“So…it’s normal for the grand opening of a business to have lions and dragons dancing around?”

“Yes,” she said and then patiently explained, “The lions will scare away bad luck and the dragon will bring good luck and prosperity so the business will be profitable.”

I tried to get over there fast enough to get pictures, but by the time I had this conversation things were wrapping up. There were two impossibly tall hype girls tottering around in 3 inch skirts with 6 inch high heels. There was a Tanqueray gin cart (it was 11:30 on a Tuesday morning). There was a drum band and two lions that lit up, and I caught the tail end of a long dragon disappearing down the street. I tried to get a few pictures, but I didn’t do a great job. 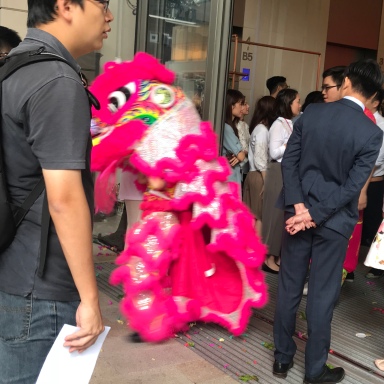 I keep imagining what the equivalent of this would be in my hometown in Louisiana. The best I can come up with is the Virgin Mary and a giant crawfish doing a 2-step to some Zydeco band with an accordion with free flow Bud Light. I think I’m onto something.

One thought on “The Weekly # 6: Foods For Your Personality and the Prosperity Gospel of the Dragon”