The Weekly #4: Is This a Funeral? Important Jobs, and Finding Your Passion

Hope you have all had a wonderful week! Meanwhile in Hong Kong…

The floor that my office is on is split between our center and a hair salon. The hair salon recently held a “Grand Opening” for which many people sent congratulatory flowers. (Side Note: I don’t know why they were having a Grand Opening because they have been open the entire time I have been working here).

By congratulatory flowers, I do not mean a vase of flowers. I am talking about 3 foot tall floral arrangements that came with their own special column or easel for display along with a placard bearing messages and the names of the people who had sent the flowers. There is a very small space outside of the elevators before you go inside one or the other of the businesses, and the dozens of flower arrangements were crammed into this space.

The overpowering smell of lilies (which, in spite of being my namesake, I do not like the smell of) and profusion of greenery made it feel very much like I had been transported into a funeral parlor.

I basically had to go through a jungle to get to the bathroom. My coworkers assured me this is standard practice for a Grand Opening of a business, and that it was the same when our center opened, though not quite as excessive. I can’t imagine how much money  all of those flowers cost.

With 7.3 million people living here, Hong Kong is a very crowded city, but they have an amazingly efficient public transportation system. The MTR is the subway system, and it is clean, fast, and convenient with trains running every 2 minutes or so. However, during peak rush hours in busy areas, the trains can be filled to capacity quite quickly, so if you are waiting with a large group of people to get onto an already packed train, you might have to wait through a few trains before you can get onto one.

Had to wait through seven trains. SEVEN! 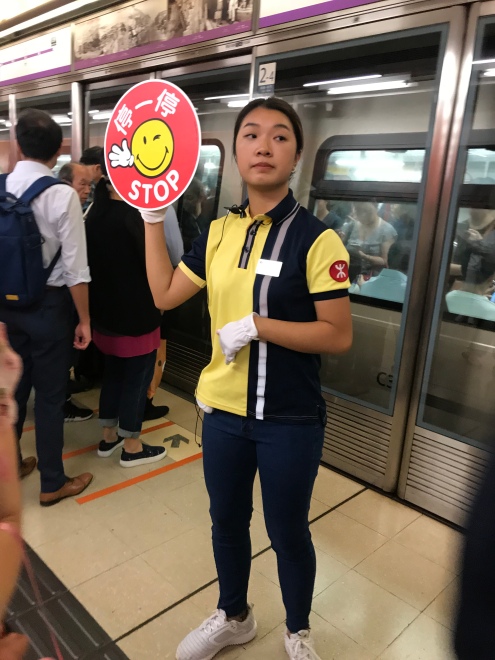 The white gloves are an essential component of the ensemble.

There is probably an official name for this position, but since I don’t know it, I will continue to call them the Stop Sign Holders. As the name would imply, these are people who stand at the doors of the train and hold up a stop sign when it is clear that they cannot cram any more people into that car, signaling that people should stop pressing forward. They also often have headsets or megaphones through which they make announcements like, “The train is full, stop trying to get on it.” (I am assuming that’s what they are saying. They always speak in Cantonese). It’s an important job, and someone has to do it. Who knows how many smushings have been avoided thanks to these wise and courageous souls!

Now that you know more about the MTR, I can go on to tell you about my student Gasper. He is 5 years old and is the son of a coworker. Gasper LOVES trains. But not just any trains. He specifically LOVES the MTR. For fun, he enjoys watching a video on Youtube that is just a live feed of the MTR running and making its stops. Sometimes I catch him standing in a corner, reciting the recorded announcements for each stop: “Now approaching Causeway Bay. Doors open on the left.”

His parents were somewhat encouraged that he has found his passion so early in life. Until they had this conversation with him:

Parents: My son, perhaps you will be a great engineer someday. Think of the ways you could expand the MTR system. What an important job! You will bring much honor to your family.

Parents: Then perhaps, my son, you could learn to drive the train, spending all of your time doing something you love and helping to keep our city the epitome of excellent infrastructure that it is today.

Gasper: (pauses to consider). No. Because then I could never go to the toilet.

Parents: Then what is it you want to do with your passion, my son?

Gasper: I want to be the Stop Sign Holder.

I imagine their reaction was something akin to how my mother felt when my preschool-aged brother announced that his life ambition was to become a cashier at Shweggman’s, the local grocery store.

But I say, you know what, Gasper, it’s a tough job and someone’s gotta do it. I say, good on you for knowing your passions and priorities at such a young age. I hope all of your dreams come true.