Early Sunday morning, while the US was being devastated by Hurricane Florence,  Supertyphoon Mangkhut hit Hong Kong. (If you didn’t know, the difference between a typhoon and a hurricane is simply where they originate. They are called hurricanes in the Atlantic and typhoons in the Pacific). The storm was the biggest and strongest one in Hong Kong’s recorded history, equivalent to a category 5 hurricane.

We woke up Sunday morning and watched from our 6th floor apartment as gusts of wind up to 100 mph snapped the tops of trees and blew rain in all directions. Our apartment is very well insulated and we cannot usually hear the rain or wind through our windows, even when it storms, but this time the wind was screaming.

Even though I have an intense fear of bad weather, I couldn’t keep myself from staring out the window most of the day. The sheer power of the storm was riveting. The best way I can describe it is that it was like a tornado made of rain. I grew up in South Louisiana, and I have lived through many, many hurricanes. I was a senior in high school when Hurricane Katrina hit. But I have never seen anything like this. This was the view out of my window.

At one point I texted my mom and told her I felt like I was in the beginning scene from The Wizard of Oz where all this random stuff is flying by Dorothy in the cyclone.

We have a small degree of sea view from our apartment, though the water is somewhere between 1/4 and 1/2 mile away from us. During most of the storm, it was raining too intensely to see past the buildings right across from us, but at one point I realized I could see waves breaking over onto the road. Even from our distance, the waves looked huge. I learned later they were 3-4 meters tall.

One of the strangest things I saw, which was impossible to film or get pictures of, was how the rain was sometimes like visible, individual balls of water (imagine a dew drop on a leaf) swirling around in the air like snowflakes. The wind was so strong that it was stopping the raindrops mid-fall and causing them to reverse direction, giving the effect that they were pausing in mid-air before blowing away. It almost looked like snow or ice.

The storm raged on like this for about 9 hours before it started to calm as it moved further away from Hong Kong. We are so thankful to have made it through safely and without any damage to our apartment. The glass roof of the atrium we travel through to leave our apartment complex was shattered, and the escalators below it, which we use to get down to the street level and to the MTR station, are not running. Plenty of trees around the property are down, but there was no significant damage that will affect us or our home. 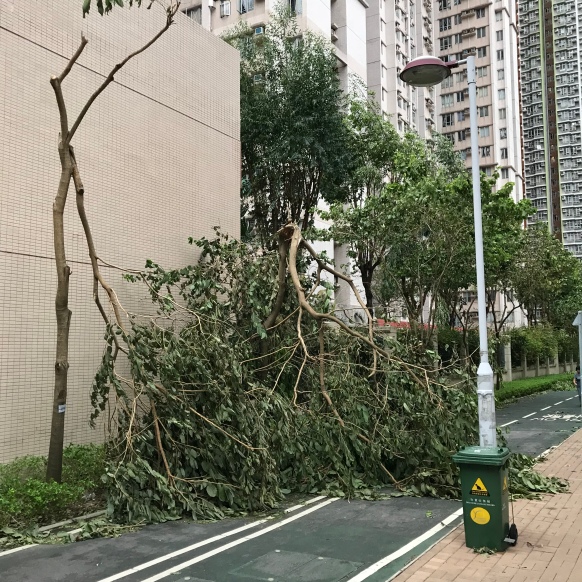 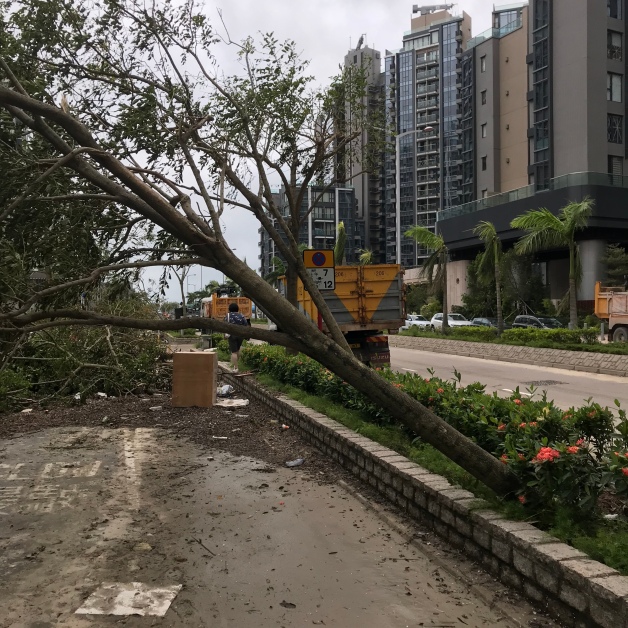 Although the regular schools are closed, we are back at work today. Traveling through the city in the aftermath of the storm is somewhat eerie. Even though life is resuming as normal, so many little things are just “off.” The tree-lined streets are now lined with half-trees whose tops have snapped off completely or are dangling down like hangnails.

In Hung Hom, an area I have been working in once a week recently, the windows blew out of office buildings and littered the streets with the contents of those businesses.

The interior of the building above

One of the things that struck me through this whole experience was how America-centric American media is. I know that’s a bit of a generalization and that there were some news outlets reporting on the typhoon, but I saw nothing about it on my Facebook feed or news alerts, and I had multiple people tell me they hadn’t heard anything about it until I posted something on Facebook. I honestly don’t think I would have known about it if I had been in the US.

Meanwhile, I have seen constant updates about Hurricane Florence, both from those affected and from others extending sympathy and support. Until 7 weeks ago, I lived in South Carolina, and most of my friends are in NC or SC, so I have been eager for updates. I am very concerned about the damage and danger of Florence, which has been devastating. But also. Mangkhut was 5 times stronger than Florence. And it was hitting some areas (like the Philippines) without the infrastructure or resources to deal with it or with its aftermath.

I’m not trying to make a political statement or to point a finger at anyone else because I found myself equally implicated in this, but it did make me realize how ethnocentric I am guilty of being, even as I consider myself a compassionate citizen of the world.

My thoughts and prayers are with people in the Philippines, in Macau, Shenzhen, and Southern China, and with those in my own city who have suffered loss.