The purpose of this series is to share some things Jonathan or I have noticed or experienced in our every day life in Hong Kong that don’t warrant their own post. So without further ado, these are some observations and experiences from the past week or so.

Never Leave Your House Without the Essentials

This is surprising to me because in other large cities I have lived in or visited, I’ve found that the more populated an area is, the more people rush around. Here in Hong Kong, I often find myself impatiently trying to get around people who are shuffling along, usually looking at their phones.

If you go to a restaurant for lunch there will often be a lunch set special that includes a drink. Your drink options are usually a variety of hot teas. Some places also offer cold teas, but often charge extra (I suppose for the ice). So on a day that is so hot and humid that you have pit stains just walking down the street to the restaurant, it would be totally normal to sit down and enjoy a steaming bowl of soup and a hot tea. We’ve learned that there is a common belief here that cold drinks are not good for your digestion. This was also true in Korea where people would often claim they became sick because of “eating too many cold foods.”

Everyone Has a Designer Bag

Ok, obviously not EVERY SINGLE ONE of the 7 million people here has a designer bag…but, I can honestly say I have never seen so many in one place. Not in New York City, not in Singapore, not in Paris. I can’t quite figure it out. I know that its a huge status symbol to carry Chanel, but does everyone really have enough money to buy these bags? Are they really good fakes? Or do people go thousands of dollars into debt for them? Or maybe since it would be less typical to own a car, the money you might spend on a big purchase like that instead goes into handbags? The street I work on has a Gucci, a Chanel, a Dior, and a Cartier. The next street over has Hermes, Louis Vuitton, and Valentino. But the big shopping plaza a few blocks beyond that has all those same stores again. I mean, people must be buying these things, right? I may never join the ranks of the branded, but at least I get some fun window shopping out of it!

I just had an idea…maybe everyone walks so slowly in order to show off their designer bags to their best advantage? Like they just want to make sure we all have time to appreciate it. Just a thought…

In a city with such impressively tall buildings and dazzling light shows, Jonathan and I have both found this one to be an interesting and funny juxtaposition of modernity and tradition or east meets west. Earlier this week, one of the buildings I walk by every day on my way to work had a giant pile of bamboo poles in front of it. A few hours later, it looked like this: 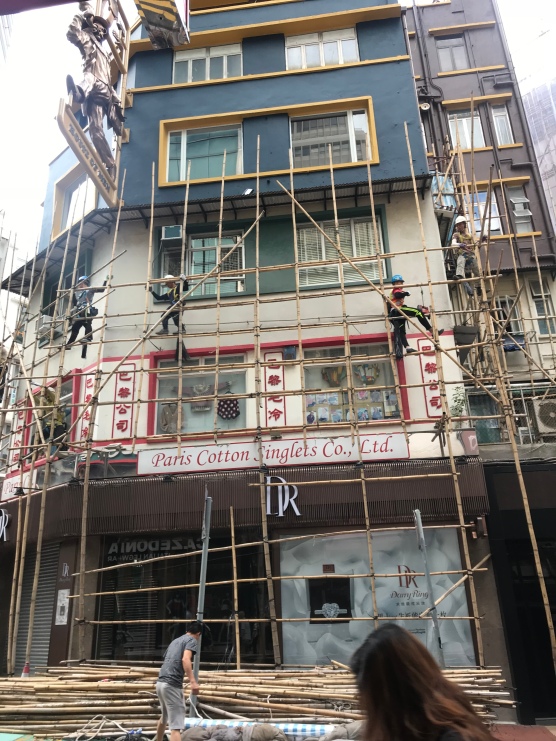 The same happened with an area inside of Popcorn 2, the third of the four malls our apartment complex is connected to. (Side note – there is also just plain Popcorn. Pun intended, but also true). This struck us as even funnier because it’s this huge bamboo structure indoors.

While I personally would be terrified to scamper around on bamboo poles tied together with twine, this must work because Hong Kong is pretty darn good at impressive buildings.